Projects for the adaptable city (14) 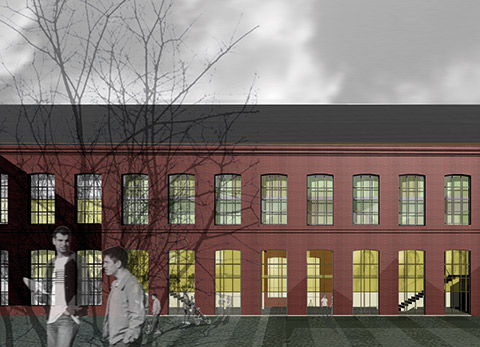 Europan 12 proposes to explore the question of time with a view to making the city more adaptable. One of the sites proposed by the organization is Hammarö (Sweden).

This project is included inside an urban recovery intervention involving a 19th century textile factory. In 2012, the main atrium of this complex will form part of a network of municipal cultural centres, placed in former industrial buildings. The resulting complex will then be a hybrid block of public service buildings, public space and residential use. This use is concentrated in a 19th century atrium which will be completely emptied to then build 80 housing units for young people. The repetitive nature that the housing program imposes makes common spaces the focus. These spaces are visually connected in a diagonal fashion from the ground floor vestibule to the trusses of the roof.

Barcelona City Council set up the Creation Factories to grow the network of centres supporting cultural production. They are spaces to facilitate the work of creators and cultural agents, which aim to promote social cohesion in the areas in which they are located. In total, eight centres have been set up which have reclaimed eight obsolete buildings in the city. The Fabra i Coats Factory has given new life to the Sant Andreu neighbourhood. Along with the creation centre, a social housing block will be added in another refurbished building on the site (see the project by Roldán + Berengué published in Next), while the work for the huge La Sagrera railway development goes on nearby. 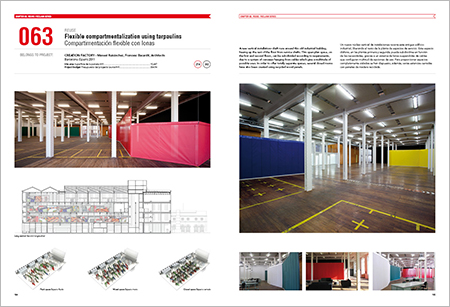 The facilities of a former brewery have been converted to housing units in the interior of this block in downtown Leuven. A passageway running from the street gives vehicle and pedestrian access to the interior of the premises. Inside, five row houses have been built in the old stables; six large apartments in the main building of the complex; and six new courtyard houses at the rear of the plot which was empty. The conversion work on the existing structures, which were very run-down, was extremely complicated: the structure has been reinforced and the facades adapted to the new use. The stables only receive daylight on one side and it was necessary to adjust the typical typology of row housing to this reality. In the production facility, the clear height between storeys was only 1.80 m and all floor structures had to be changed to obtain a total of five storeys with a dwelling unit on each one and two more maisonettes on the ground floor.  The new dwellings are constructed over a parking garage which is accessed through a tunnel from the first courtyard. The layout is based on a need for privacy in a location surrounded by taller buildings. The position of the openings impedes the view from the neighbouring dwellings and the light stone cladding ensures the maximum light reflection to the interiors of the small courtyards. 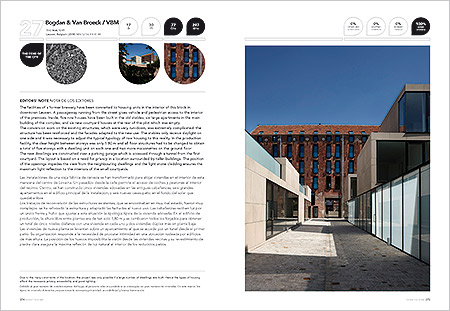 The project occupies the facilities of a former sugar refinery located in a block in the Cerdà plan. The block is divided into two parts by a passageway: a situation which is typical in the grid of the Barcelona urban extension. This passageway is used to concentrate the access areas and the free spaces which define the layout of the intervention and which connect to the immediate settings of the neighbourhood open onto this. The main aim has been to maintain the industrial heritage: the volume, the brickwork on the facade, the clear heights, the openings and the wrought iron trusses have all been preserved. The former units have been sliced vertically into sections according to the distance between the trusses of the roof structure obtaining 29 two or three storey dwelling units. There are a total of 7 types distributed in one, two or three storeys. In any case, the planning regulations allow their shared use as housing, as well as offices, workshops or exhibition spaces. 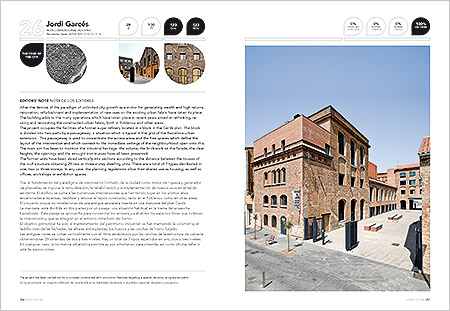