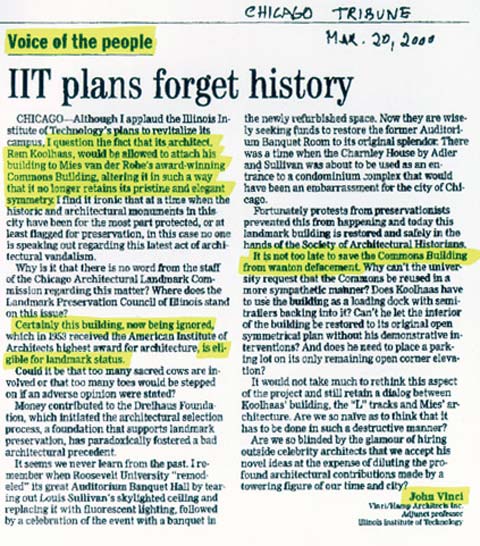 Trouble. According to statistics, a student and his or her parents decide, within five seconds of arrival, whether to apply to a given university or not.
With that test, Mies van der Rohe’s IIT Campus is in trouble.
The IIT campus is a masterpiece invisible to the contemporary eye. Mies’ work has become unnoticeable without explanation.

Cleaning
I do not respect Mies, I love Mies.
I have studied Mies, excavated Mies, reassembled Mies. I have even cleaned Mies.
Because I do not revere Mies, I’m at odds with his admirers.

Urbanism
It is a mistake to read Mies as a master of the freestanding, or the autonomous. Mies without context is like a fish out of water.
The iconography of Le Corbusier could dispense with neighbors or even the city; Mies would be unimaginable without them. In his collages and models, context is annexed to support his campaigns.

The villas of the 1930s can be read not as single entities but as fragments of an urban condition. Mies is Roman; the Berlin villas fit together as effortlessly as their twins in Pompeii.

No one, especially in Chicago, talks about Mies’ quality as an urbanist.
It is the beautiful ambiguity of the IIT Campus that the status of its built substance oscillates between object and tissue, that its modules imply potential extension yet end emphatically, that its structures hover between recessive foreground and prominent background.

The IIT campus was conceived in 1939, built initially by Mies from 1942 to 1958, then ‘finished’ by his acolytes from 1958 to 1968.
In the preliminary masterplan, Mies used a wall of linear, generic buildings to frame a courtyard that receives two Crown Hall prototypes.
The generic is used as setting for setpieces.
In the definitive plan, the background buildings become foreground –setting as setpiece.
Mies does not design individual buildings, but a formless condition that can manifest itself as building anywhere, be (re)combined in an infinite number of configurations.

Marooned II
The Commons Building was intended as an object in a designed context. Since its construction, the strip that faced Mies’ Campus on the east side of State Street has become derelict and is now completely abandoned to parking.
The encounter between the lone Mies box and the rocket of the passing EL trains is as absurd as Lautremont’s encounter between the umbrella and the sewing machine: a surrealist pastiche. Without context, the Commons has become a non-event.
The Commons is lost in a no-man’s land, a building in a void, doubly marooned within the larger space-wreck of the IIT Campus.

Fundraising
The Commons started as a failure of fundraising.
“[Due to] the inability of IIT to raise funds for the Student Union, a pendant to the library as one of the two buildings of a public character on campus, the Commons scavenged many of the functions allotted to the Student Union, and due to Mies’ deep frustration… Crown Hall became the great symbolic presence on the Campus rather than the Student Union.”*
The original Commons project called for an ‘amenities center’ for the IIT campus including a dining hall, grocery, barbershop, laundry, possibly even an open-air development.
Uninterested in the program, Mies left the design to Gene Summers, the project architect, refusing to consider the project until Summers proposed creating an enclosed shopping mall.
*Phyllis Lambert, letter to the author

Loyalty
Mies needs to be protected from his defenders.
Can respect kill?
In 1986, the Barcelona Pavilion was reconstructed in color. Through its resurrection, its aura was killed. (In architectural history, it remains stubbornly black and white.)
The mid-80s coincided with the initial apotheosis of the market economy.
Coincidence? Was Mies used as city marketing?
From homage to offence in the name of memory and respect.
In the market economy, shopping sustains the urban domain. A large section of the Pavilion is now a souvenir shop.
“How has Mies been treated throughout the world…? The Barcelona Pavilion… has been rebuilt and is now a major attraction.”*
*John Vinci, the most vocal opponent of OMA’s design, in an open letter submitted to IIT in defense of the Commons Building

Solution
Incorporating the Commons into the Student Center generated context and bulk. The adjustments necessary for this new coexistence were a fraction of the abuse the building had already undergone. In fact, by connecting it to our project, we could generate the dollars to restore it. Together, the consolidated Student Center became an urban block that could begin to re-establish the intended Miesian dialectic between fullness and emptiness, city and campus.

Solution II
Years after its apparently indifferent conception and subsequent neglect, the Commons becomes a masterpiece overnight, simply through (the threat of) OMA’s touch.
“What about those of us who have to live with this kind of vandalism? What about the future of preservation?”*
A preference for the embalmed over the authentic has fuelled American culture in the 90s. Instead of ‘using’ the Center in a robust way, our critics proposed turning the Commons into a ‘visitors center’ to enshrine its (retroactive) dignity.
Final solution for the Miesian: to save from life, rescue by tourism.
Vinci: “There are functions more compatible with the Commons that would not abuse its architecture…. Why not consider putting the University Club and Mies information Center in the Commons along with other compatible services? It would be a wonderful place to experience Mies’ architecture.”
*Vinci, open letter

Disengagement
Negotiations were launched, concerned with ‘minimizing’ an engagement that could bring new vitality.
Illinois Historic Preservation Agency: “The treatment of the immediate setting of the Commons Building is key to minimizing the effect of the new design on the historic building.”
Each breakfast with the Miesians brought new suggestions for disengagement, uncoupling, separation.
And, from Vinci, “Please tell Koolhaas that I am not some monster trying to destroy him…. Some day I will have to face him… and I don’t want to have to punch him in the nose…”*
“Ask that Koolhaas move his building two bays of the Commons Building to the south. This will not change his plans or cost any more…”
* Letter, forwarded to author.

Food Courtship
‘Others’ enjoy freedoms that are unavailable to the architect. As OMA was struggling with History, the IIT’s client left the food consultant free range to speculate about reconfiguring Mies as a contemporary food court.Their sketches were breathtaking in their daring, energy, innocence. But they were unreadable on architects’ radar. Only architects can defile architecture.

Proximity
In all my visits to Chicago, I learned only one new thing from the Miesians, or actually two.
One, Mies had received a letter from Hugh Hefner once, asking him to do the Playboy Headquarters–Mies had said no, for reasons no longer accessible.
Two, Mies’ model shop had a (frequently exploited) view of the photo studios of Playboy Magazine–all during the Fifties and Sixties, Mies’ architecture and the first generation of playmates had been fabricated in voyeuristic proximity.
It is exactly that kind of proximity we proposed for the Campus Center and the Commons, and which the Miesians wanted to undo.

Lapidary
Maybe it is a law that dogmas are defined by those that are most prone to violate them.
Mies’ work had an essence of formlessness, amorphousness, nothingness, perversion, and anxiety behind a stealth shield of serenity.
By never ‘explaining’ himself except in the most lapidary terms, Mies condemned all of us –especially his intimates– to second guess his motives.
Mies is (too) easily misread. To what extent is Mies –his pronouncements, his example, his method, his aura– to blame for his own misreading?

Mies’ fusion of the sublime and the generic into a new hybrid was a form of alchemy, a laboratory experiment that could never be duplicated by others, never be verified. Mies’ is a science purely based on belief.
Is the source responsible for the intelligence of the followers? Could Mies have avoided the dissemination of the Box that, in the 60s and 70s, threatened to take the essence of the original in an avalanche of reproduction?
Education can always be read as a plot: it may be that Mies at IIT was always a little too encouraging of the generic, preferring to keep the sublime to himself.

Conundrum
This image is a conundrum. After at least 26 hours of accumulated scrutiny, it has yet to reveal the secret of its impact.
It is the only photograph of the Metals Research Building in circulation. How did Mies exercise so much control? Is there any other modern architect who so insists on perspective? Is Mies the (huge) figure near the colossal doors? What is the significance of the voluptuous car?

Self Abuse
Yet, Mies was not against modification.
In 1956, long before the debate over the Commons, Mies’ office had already extended the Metals Research Building with unsentimental bluntness.

Mies Watch
In the meantime, close scrutiny revealed that the Commons had undergone a shocking number of modifications without audible protest from the architectural community.
From 1953 to 1999, more than 30 interventions were undertaken in the ‘original’ Commons: drain pipes, machinery plant room (on the roof) -- an endless series of abuse.
The interior was completely unrecognizable. Glass had became sheetrock; a small symmetrical pavilion acquired asymmetrical bulk to function as a pizza parlor.

A building once pristine in its compositional order and volumetric integrity had been drastically modified by casual platforms placed on the roof, air conditioning units indifferently appended, drainpipes wreaking havoc on symmetries.

In a way, it was a triumph of the Miesian will: anything can be or become anything.
The Commons survived with an Olympian impassivity vis a vis the encroachment of the pragmatic, the flux of real life.
The entire transformation took place on his acolytes’ ‘Mies Watch.’ Their obliviousness allowed alterations by others (‘food experts’, electricians) to remain outside the meticulously preserved limits of architectural consciousness.
According to Vinci, “To this date… no successive architect has considered annexing or altering any of Mies’ original architecture.”

Defaced
Where is Mies more beautiful, defaced or restored? As ruin, or reconstitution? The Commons could be read in two ways: a surprisingly accommodating, elegant shed, intended by Mies to be common, to absorb whatever iterations of student life are thrown up –to undergo brutal retrofits, each unit an addition to an ultimately aleatory, forever unfinished composition– or a pathetically martyred icon, full of wounds, scars, legible degradations.
In the first reading, it retroactively becomes part of the Student Center; the saintly scenario can only culminate in its second coming.