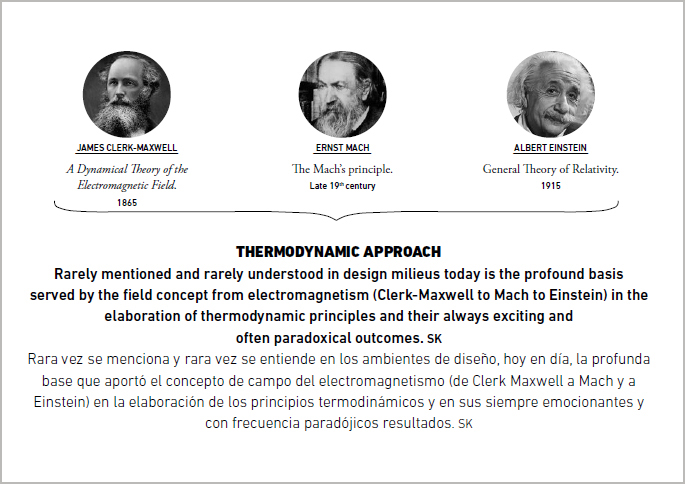 "‘Organisation’, like all else, has a provenance and ‘origin’–as well as a prehistory–both of which matter, or indeed can be made to matter as a means to invent a graceful exit from the digital anomie that we all consider to be our discipline’s current ‘state of the art’. Each touch point in the concept’s history moreover represents a firm episode in the development of a materialist modernity1.

Its ‘prehistory’ can be said to date to 1770, the year (more or less) when Denis Diderot elaborates in his conversation with D’Alembert the idea that the faculty of generalizable purposiveness that can be intuited in natural things derives nowhere else than from “une certaine organisation” inherent to ‘sensitive matter’2. In sum, organization is the capacity to receive a signal3, as well as to send and store one (memory).

At almost the same time in Germany, Johannn Goethe proposes a theory of plant growth and differentiation mechanics (another example of Goethe’s powerful, natural ‘algorithmic’ intuition) as a product of three morphological impetuses –a flexible form, a cycle and a gradient4– ‘managed’ within an environmental framework of factors to produce endless variations from the possible mixtures, yet always subject to both internal AND external control5 and forever linked to them.

Form in both cases is endowed with a new feature: it becomes at once the memory of events and a progenitor of new ones. These have been referred to as ‘genetic’ ideas6..."

Extract from the essay "Organisation" by Sanford Kwinter, published in a+t 46 Organization or Design?

1. “Materialist philosophy” today generally refers –with none of the prejudice with which former epochs used the term –to non-,post- and supra– metaphysical conceptions of nature that situate or conceive of causes as inseparable from the sphere of action of their effects. Within the western tradition the roots of this thought are frequently derived from the Presocratics–preeminently in the atomist cosmology of Democritus– and traced through the natural philosophy of Lucretius, through Giordano Bruno and Nicholas Cusanus in the nascent modern period, and on through the philosophical social and economic materialists of the 19th and 20th centuries (Marx preeminently but also Diderot before and Nietzsche after, each and all oriented against the ‘vulgar materialists’). These ideas came to form the basis of many 20th century philosophies of nature, including the postwar social philosophy movements that include the works of Michel Foucault, Gilles Deleuze, aspects of Henri Bergson and Alfred North Whitehead, etc. A significant exponent and chronicler of materialist history today is the author Manuel De Landa, any of whose works provide a rich and limpid summary of the contemporary position. A central tenet, and one that has had considerable impact on recent design thought, is that matter itself possesses “morphogenetic” capacities and is not simply an inert recipient of formal information imposed from without.

2. “De la matiere sensible”–in Le Rêve d’Alembert, translated as D’Alembert’s Dream in Denis Diderot, Rameau’s Nephew and D’Alembert’s Dream, Penguin Classics, New York, 1966. Diderot’s resistance to mechanism –and his postulate of a creative, indeed spontaneous materialism that overrides it, is a central precursor to the metaphysical invocations of later computationalists.

3. The much invoked phrase “Information can be defined as the difference that makes a difference” of Gregory Bateson stands as a landmark in the midcentury information theory (cybernetic psychology). What Bateson refers to, and what we draw on here, is the capacity of any point in space and time to differentiate itself from its surround by manifesting a greater proportion of this characteristic –it can be any quality or feature– than the background against which it operates or is made legible. Information and organization are not equivalent terms but frequently appear in neat and legitimate superposition to one another. Gregory Bateson, Steps to an Ecology of Mind: Collected Essays in Anthropology, Psychiatry, Evolution, and Epistemology, University of Chicago Press, Chicago, 1972.

5. Control theory belongs to the one or two most important conceptual developments in the natural sciences of the last 200 years. It posits a continuum of interconnected signaling– communication or influence –upon which the information problem above is able to make sense; once again it generalizes and materializes the problem of ‘causality’ by placing its action on the same plane of operation as that of their ‘effects’– hence the “flat ontology” so worshipped (and dimly grasped) by contemporary ‘speculative realist’ philosophies. In late 19th early 20th century theoretical biology it took the term ‘regulation’ (and often beforethat as the Aristotelian-inspired term ‘entelechies’) in the work of Hans Driesch, Wilhelm Roux and others as all biologists were forced to account for the fundamental problem of how asymmetry (difference) arises out of apparent homogeneity (preeminently in the early blastula).