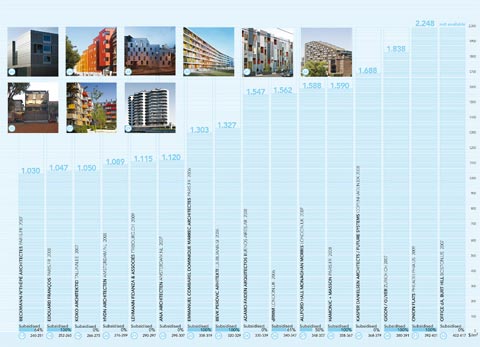 HoCo, the new volume published by a+t in the Density series, which will be on sale on 25 June, is not a good practise manual , but is a review and comparison of real cases. The authors of each project provide the build cost per square metre and it is this data which orders the book, from low to high.

In order to put them in order we have converted the local currency provided to us by the authors into international dollars, which is the hypothetical currency unit which expresses the Purchasing Power Parity (PPP) between countries, updated yearly by the International Monetary Fund.

In each project we establish the relation between the local currency and the International dollar based on the nominal per capita Gross Domestic Product of each country, in US dollars and in International dollars (PPP), provided by the IMF. For instance, the calculations we have applied to a project built in Buenos Aires are the following:
Nominal per capita GDP of Argentina: 8,146 USD (imf.org 2008)
GDP in values of purchasing power parity (PPP) of Argentina: 14,376 $PPP (imf.org, 2008)

From which we can infer that 1USD in Argentina is the equivalent of 1.76 $PPP, that is goods costing 1USD in the USA would cost 1.76USD in Argentina.
Hence, the project implemented in Argentina, with a construction cost of 3,071 ARS/m2 is equal to 878 USD, which translated to International dollars becomes 1,547$ PPP, which is the value set out in the Costs index.