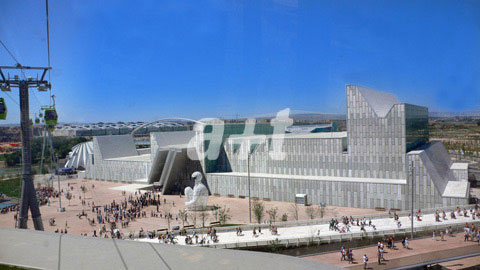 The Expo 2008 site is located on the meander of Ranillas, on a surface of 25 hectares, next to a new 120 hectare park.
Beyond the fare of this three-month event, the Expo has brought with it the transformation of Zaragoza and its coming out on the competitive map of Spanish and European cities. To the city's introduction as a logistic platform in the centre of gravity of Spain's richest area, the tourism that these kinds of events draw can also be added.
In a recent interview, mayor Juan Alberto Belloch proudly stated that because of the Expo, "five Guggenheims" would be opened in Zaragoza, referring to the architectural appeal and magnetic power of five of the works built on the site. We're not sure if the five works that the mayor refers to can or should be compared to Bilbao's museum, but in any case, we visited them and have included the ones that we feel are most relevant.
In future issues, we will show the Conference Centre of Aragon, the Bridge Pavilion, and the Spain Pavilion on the Expo site, as well as the Water Park on the adjoining land. In addition, we will shed light on a "sixth Guggenheim," unnoticed in the noise of the celebration, but that has undoubtedly changed the relationship of Zaragoza's citizens and their river. This is the recovery of the banks of the Ebro as a pedestrian promenade, a modest and silent work that links to the public spaces of the Expo, but which has, along both sides of the river, returned the experience of the river to citizens and has connected the neighbourhoods of Zaragoza to its historic centre.
The Conference Centre of Aragon, by Fuensanta Nieto and Enrique Sobejano, is its section, which, extruded, draws a fractured profile on the Expo site, on a similar exercise to the Bagsvaerd Church by Jorn Utzon. It holds two main areas (the exhibition areas and an auditorium to seat 1500 people) connected by a common lobby. The auditorium was conceived to be able to make stalls and mezzanine independent, which would create two areas, useful for smaller-scale conferences. The exhibition area is reached independently, which will allow its use for different exhibitions at the same time. A group of modular rooms, laid out on several floors, complement the public building. 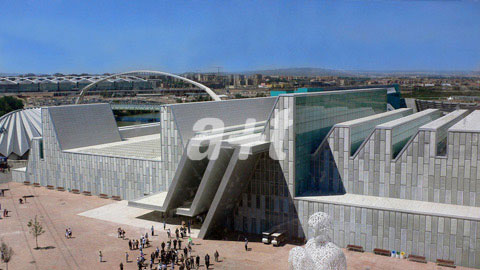 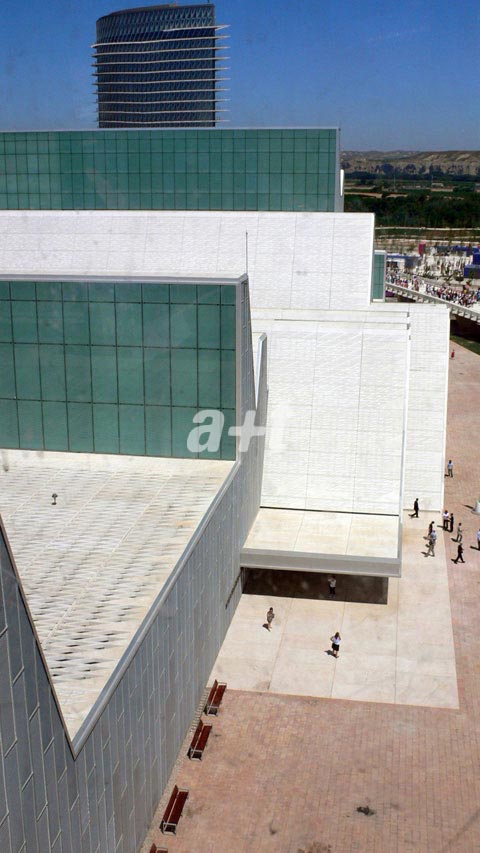