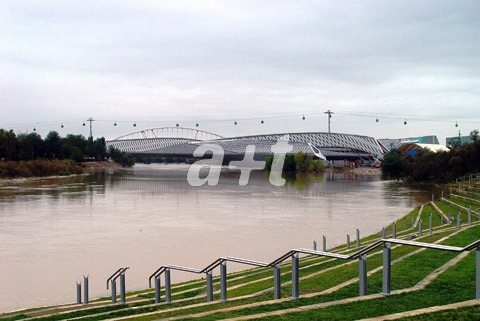 With her first work in Spain, the Iraqi diva has managed to materialise those drawings that fascinated me as a student. The volume of the different pods placed over the river, cladded in plastic and glass scales, is reminiscent of the trunk of an anaconda, looking over the river Ebro's turbulent waters.
Regarding its contents, the organisers promise a spectacular set up for the pavilion and predict success among Expo visitors, though what I am not sure about is its use as museum space afterwards.
Zaha Hadid's design for the Bridge Pavilion is covered in lightweight concrete and glass supported by a metal panel, made up of triangular sections that lie on the edges of the river and on a central island in the channel. Besides providing visitors with a footbridge to cross the Ebro and connecting the nucleus of the boulevard of the Intermodal Station to the Conference Centre area, the pavilion will host an exhibition on good habits in water management. The surface of the Bridge Pavilion is divided into four bodies, in a way that two of them are open to pedestrian traffic and the other two are closed and air conditioned to hold exhibitions.
To complete the work, it was necessary to carry out a complicated system of anchoring the structure with 72.5 metre deep piles. Meanwhile, the structure of the panel was built on land and, once completed, moved to its final destination over the Ebro. The bridge covering consists of some 14,000 hand-made pieces. And here ends the overwhelming string of data that can be found in any overview of the project that will most likely become the Expo's main icon.
Beyond the architectural or aesthetic considerations of the project, one wonders if the thirst for emblematic icons of our cities can be quenched at any cost. Listening to a speech on the supposed sustainability of the project is almost perverse, when the budget needed to construct it went from 25 million euros in 2005 to 62 million, as stated by Zaragoza's mayor on 16 January 2008.
We've known for quite some time that Zaha Hadid is expensive, bent on breaking existing structure records so her works look like her drawings, but it is disheartening to see that the public powers-that-be, greedy for emblematic icons in their city, are willing to pay.
In 2007, we showed some of her homes in Vienna (DBOOK pp 100-105), whose construction cost was €2745/m2, the highest of all of the cases published in that book, while the cost of the other four housing projects in the same city cost €740, €1230 and €1700 m2. In April 2008, Building Design said that the initial budget of 72 million pounds estimated for the Olympic pools in London 2012 has tripled, reaching 303 million pounds to be able to carry out the winning project, whose author is, of course, Zaha Hadid.
Even Richard Rogers classified the porject as "the crown jewel" of the Olympic grounds… The hypnotic effect of Zaha's renderings is undeniable and I applaud it. Nevertheless, a little common sense could be demanded of the managers of public wealth when looking at this diva's budgets. 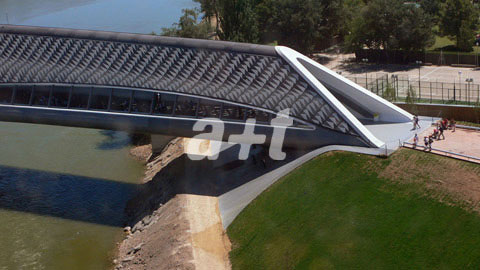 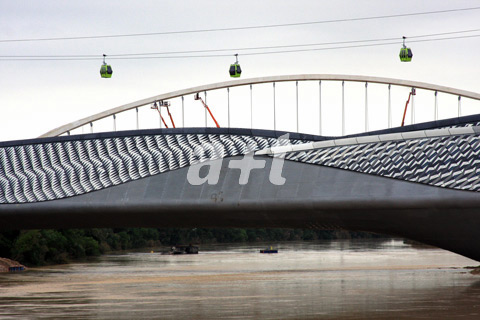