Zaragoza looks over the Ebro

Accompanying Plan. Pro Expo Consortium 2008
Common in this type of appointments, the legacy of the Expo will fortunately go much further than the site itself, a motley set of architectural gestures somewhere between an amusement park and a shopping centre.
In this way, the improvement of local and regional infrastructures is added to the so called Accompanying Plan, a public initiative that looks to recover the banks of the Ebro as it passes through Zaragoza and surrounding towns.
I went along the river banks between the Expo site and the historic district and confirmed that an outstanding maintenance and integration strategy stands out in the life of the city of the original riverbank landscape after the modest and simple works.
The route begins on the Expo site, on the roof of the international and regional pavilions by ACXT, a factible garden area with views over the entire site, the river and the city: a breath of fresh air over the dominating confusion of street level. Next, on the banks of the Ebro, the thematic plazas by Batlle I Roig, saturated by the profusion of objects, give way to an itinerary over the river along elegant floodable stands, marked by the eco-geographical bench, a 700 metre long installation by Isidro Ferrer and Batlle i Roig, done in modules of steel and colored tesseras.
Outside of the Expo, on the right bank, a new park connects the ACTUR neighbourhood to the river's edge, a silent intervention far from the television world aesthetic of the Expo area. Lastly, a new pedestrian walkway connects this point with La Almozara, a humble neighbourhood on the other side of the river, where another walk along the riverbanks to the historic district begins. 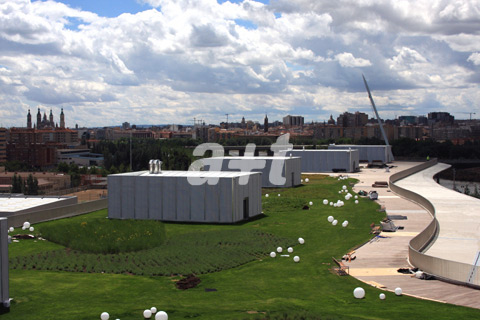 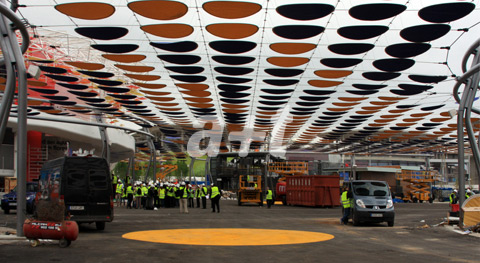 Sunscreen protection for the Theme Plazas