Towards a new public space? Wanderings in the wasteland of the Ost Strand, Berlin 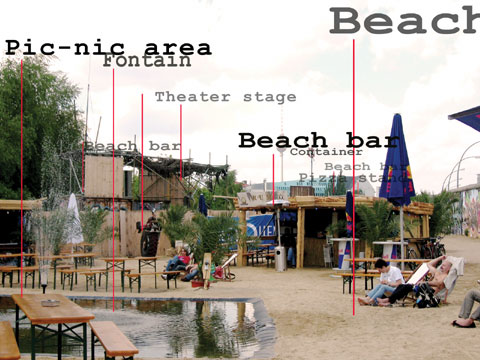 The test site is located on the former site of the Berlin Wall, at only a few kilometres away from the Alexander-Platz. Abandoned military wasteland, the place is nowadays an empty urban space. Today, it has become a rupture within the traditional urban structure. At the time of the wall, the enclosure of the wall tore the town in two and was a physical void, the so-called “Corridor of Death”.
The spot, formerly called “km 25-26”, according to the wall’s positioning system, is now called “Ost Strand”, East Beach. Formerly, it separated the neighbourhoods of Friedrichshain and Kreuzberg, reunited since 2001. It is composed of both a sandbank, the reminder of a short-lived industrial activity after the fall of the wall, and wasteland now taken over by spontaneous vegetation. The site is located between the Spree river and one of the most important relics of the wall, The East Side Gallery. For the traditional city, this is just vacant space, without any special vocation, an abandoned no man’s land, a forgotten place.

Approach
Inspired by Michel de Certeau’s “restitution des arts de faire”, the project does not intend to provide solutions or pronounce a diagnosis without future, but to set out clearly and intelligibly the “already happened”. Like a deciphering of the hidden meanings, our project tries to make understandable what the city denies.
During the nine months I spent in Berlin, my visits to the site became more and more frequent and precise. It was not so much of a stroll or an idle walk but a repeated and organized drift towards the site.
The organisation of “layers of transcription”, which help to understand the different crystallisations for the composition of the terrain, influenced my perception as well as my task of transcription. These layers of transcription impact on the site’s vitality and help understanding the place, without however restraining it into a final, and therefore restrictive, acceptance.
These geographical super-imposed layers, by means of analysing the already existing, the substrate, provide the qualities of that place, which are denied by the traditional city.
This work does not need a chronological and orderly lecture. These layers, although linked together, are distinct elements, parallels histories. Only an active and sensitive reading could link, associate, divert, and even rectify these layers in order to invent and activate new processes of interpretation.

Biotope
Since 1989, a functional ecosystem has developed along the stretch of emptiness once occupied by the Berlin Wall –known as Ost Strand–, organized according to a different logic than the surrounding urban tissue. This alternative and rapidly changing microcosm is progressively imposing its physionomy upon its surroundings, which have themselves experienced profound alterations since the fall of the Wall.
In addition, in the wake of an increasingly extensive urbanization and the “virtual globalization” phenomenon, this green belt becomes a vital part of the traditional urban structure.
This newly created “small wilderness” is both colonizing ground for fauna and flora and an open space for human contemplation. This “intrusion of nature within the concrete jungle” is indeed more than just a geographical or biological curiosity. It is as well a spontaneous cultural landscape where skateboarders, graffiti artists, fishermen and many other alternative urbanites find the freedom to indulge in their desired occupations. However, couldn’t this green corridor –which effectively acts as a buffer of indetermination within a heavily codified and strictly zoned urban environment– become an ordinance category of its own, placing the dominant planning rhetoric into perspective and acting as an open laboratory for tomorrow’s hybrid urban constructs?

Sociotope
During each of my visits to the site, I was impressed by the diversity and originality of its occupants. From the young graffiti artist, who finds in the luxuriant vegetation an ideal hide-out to practice his art, the joggers and other sports enthusiasts, the unredeemable fishermen, the tourists intrigued by this unfamiliar place which they wish but don’t dare to penetrate, to the bartenders of improvised beach bars: the convergence of these unlikely figures forms a truly eclectic and vivid local population. These different people may coexist, interact, or mutually avoid each other; in any case this site is progressively acquiring its own identity, a distinct touch from the rest of town. As a matter of fact, this significant open area enables the practice of activities precluded in most other parts of the city. While Berlin’s fragmented nature tends to question the traditional representations of urban aesthetics, the Ost Strand really responds to new urban envies. Raw materials, irritation, irregularity, incoherence, and even absurdity seem to be what people come looking for along Ost Strand, escaping thus the usual city codes for a while.
These urban vacuums provide innumerable options to flee from dull and often oppressive urban planning. It is precisely the absence of any form of planning that provides the impulse necessary for new activities to emerge.

Perceived as a parallel universe, Ost Strand is indeed a new form of public space, open to spontaneous change and non-exclusive appropriation, as well as to permanent deconstruction and remodelling, adventure and ambiguity, and thus able to catalyze new experiences.
It seems that traditional public open spaces are not any longer capable of keeping up with the current place of urban evolution. Common urban experiences are in need of new urban spaces located beyond the boundaries of the city, as we currently know it. But what are the new boundaries? How to define this new public space capable of addressing everyone’s wishes and lunacies? What is this new unexplored territory that will provide these new individual and collective experiences? How is it defined? What are its fundamental characteristics? Is it possible to create a new concept integrating the diversity of spaces located beyond the traditional definition?

Tempotope
By analyzing the different activities practiced at a given site, the “Tempotope’s layer” tries to apprehend the resistance presented by those who cannot and/or refuse to be part of this stereotyped entertainment and consumer society. The coexistence of a large variety of activities, and thus distinct temporalities, influences the level of informality that currently characterizes Ost Strand. This stratum reveals how organized and spontaneous activities interact and distribute each other throughout this extensive vacant space.

Architope
I will present hereby the different architectural typologies which are developing at the same time.
These typologies, due to the habits of “in between”, are growing on waste fragments of land, sometimes they besiege places left behind by the traditional city. Their short-lived destiny and their transitory spreading-out into empty places need another urban temporality and offer a new concept of urban spaces.
Within Ost Strand, the spreading out of ephemeral structures offers a similar universe: they will alter it as well as the place’s atmosphere. It stands always in contrast with its formal environment. The coexistence of various structures at the same place reveals its nature as being a place of permanent opposition, a new experience. Different kinds of events meet and take place here: at times they confront each other, or enrich each other, in a flexible space.
This savage informality allows the spontaneous creation of new relationships with the traditional urban landscape, or, as Virilio puts it, “encouraging the townsman to live in an unusual structure”1.
The place, far away from the traditional urban structure, gets synchronised with local habits for modification. The waste land of Ost Strand represents this new urban conflict.
In one hand, there stands the traditional city, which tries to normalise the new urban feature, and on the other, the rendering of a space, which by its aesthetic and its savage informality gives way to another appropriation. This study does not aim to fill the “black whole” of urban structure, but to render the place clear, on taking account of the “already existing”.
By intervening on the vitality of the site, the Architope layer reproduces an interpretation of the space, without restraining it to a definite and therefore restrictive destination. It aims to give a meaning to the diverse, unique and passing structures, sometimes consolidated or specific components, which do not exist for the formal city.

Conclusion
If Koolhaas had already underlined the theoretical interest in urban strategies playing on emptiness and unusual aggregations/bonds, then the example of Ost Strand wasteland confirms without doubt the validity of that hypothesis. There is neither pretentious architectural movement nor apparent esthetical ambition, these are just small diversions from the norm that will surprise certain people and which others will spontaneously put into practice. “Incarnation of a potentially liberating state against the taking over by [control society], Ost Strand site’s lively and wild development seems to escape from any plans to rectify or mediate. Indeed, these ephemeral structures, as much as wild animals or spontaneous usages, are a manifestation of the semantic heterogeneity of this “urban interruption”, which is a tangible resource to expand the levels of urban experience and cultivates openness in urban life.

Sandra Pauquet is a French/German architect DPLG. This article is based on the work undertaken during a final year of studies supported by the Architecture School of Paris Malaquais. Jury : T. Mandoul, X. Gonzalez, S. Planchez, F. Careri (Stalker) and D. Jakob.
Translation into English: Julie Branch, Stephane Pauquet.