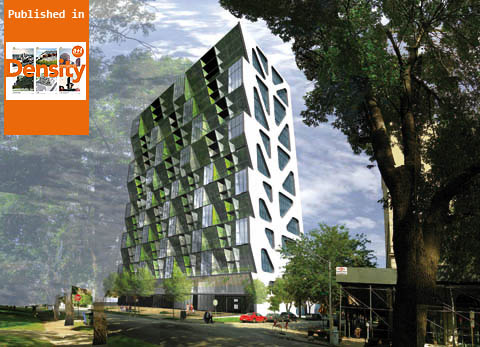 Chicago’s chain of parks and boulevards is part of an infrastructure constructed in the 19th century for creating green open space in neighbourhoods throughout the city. The wide-open spaces set up an opportunity for increased density and scale in the architecture along their edges. However, these edges have remained extremely underutilized in many neighbourhoods. Instead of tall, handsomely designed dwellings served by natural light and green spaces, boulevards are sometimes bordered by parking lots, small temporary structures and even gas stations. Solstice on the Park, a high-rise residential building, replaces an existing parking lot looking south over the 600-acre Jackson Park, the site of 1893 World’s Columbian Exposition.

Solstice on the Park, adjacent to historic Windermere House, stands 25 stories tall with its south facade shaped by solar access. Wedges of the building’s living spaces are chiseled to create a ‘self-shaded’ surface. Additional ‘green’ strategies contribute to its excellent sustainability balance. Included in its built-up area are 145 dwellings, as well as amenities such as outdoor gardens, a party room, offices, conference spaces and parking.