We include some videos and pictures illustrating the OMA projects analized in the latest series of a+t magazine, devoted to mixed-use buildings.

A distance in time of eleven years separates the first design and the latest –shown in the pages of Hybrids III. Residential Mixed-use Buildings– of the De Rotterdam building. It involves a multipurpose complex located in Wilhelminapier, the wharf which aims to act as a counterpart, on the other side of the River Meuse, to downtown Rotterdam. The project maintains the bulk of the functions originally foreseen, even though public initiative has withdrawn from the project, and as a result, the cultural uses have disappeared from the programme.
The groundbreaking in late 2009 offers an optimistic vision of how to make the most of the downturn. According to the authors, the current decrease in building costs has allowed them to take on a project which eleven years ago was unachievable.

Transformation of the Entrepôt Macdonald 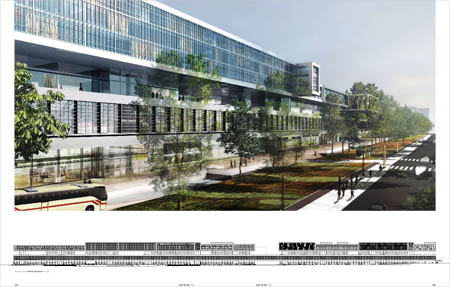 The northeast of Paris is made up of fragments of the city that jut out over a landscape of transport infrastructures. The urban plan for the area, designed by Dusapin Leclerc, looks to re-establish the connection between Paris and its outskirts by creating new centralities between cities. The Macdonald warehouses are to be converted into a huge hybrid boosted by tram and suburban train traffic. The existing structure will be used, enlarged to house various urban uses. The building, because of its large size, is comparable to the scale of Corviale or Karl Marx-Hof. Nevertheless, in face of the self-sufficient social condenser, which mixes use to satisfy only the needs of its residents, this project opens the city to achieve a mix of users.

The former Copenhagen harbour is going through a deep transformation to turn it into an axis of public facilities with a strong symbolic vocation (the Royal Theatre, the Opera or the future National Archive). On the last vacant lot on the water, the building reinforces pedestrian connections between the historic centre and the border of the canal, saving the existing motorway with a passage where accesses will be concentrated. The project raises the issue of disorderly combination of uses, breaking away from the typical hierarchical distribution of programmes, and thus driving true interaction. The resulting volume, from the stacking of smaller pieces, contrasts with the categorical scale of the large monolithic buildings that tend to close themselves to their own atria.

The Dubai Renaissance project raises a criticism of the profusion of icons in the contemporary city and could be located anywhere. It is a revision of the Modern skyscraper, although bigger and more daring: a monolithic envelope houses all programmes without them becoming apparent from the outside. On top of that, it rotates on a circular base.

Abstraction against form. In opposition to the Dubai model, the desire to make a city arises. Surrounded by skyscrapers that behave as vertical ghettos, Dubai Renaissance was designed to be a catalyst of city life: three large public areas are distributed along its section. A vertical street (an elevator core) connects them to the main floor without intermediate stops.

Jersey City looks to compete with its neighbouring Manhattan and is in the process of putting up another high-rise business district with much lower taxes and prices. 111 First Street consists of stacking up the programme in three different volumes on top of a socle. This base takes up 100% of the lot to avoid empty space between the building and the street. Each volume holds different uses and housing typologies: programmatic variations impose building formalisation. Volume rotation allows for the opening of exterior terraces. One of them, on the roof of the socle, can be directly accessed from the street so as to incorporate it in the circuit of public activities of the surrounding cultural district.