Author of the video: DutchProfiles
Project published in Density is Home

Radically economising on materials and minimising architectural resources has led to a compact volume of 8 dwellings per storey around a central atrium, whose light comes from overhead and which favours the residents meeting. This distribution serves as an alternative to the long galleries and is used to cut down on the number of stairwells. With this compactness, they also manage to reduce the surface area of the facade, which means a greater part of the budget can be given over to improving the quality of the details of the enclosure.

The dwellings are enclosed with glazed façades from floor to ceiling level which bring the surrounding scenery into the private sphere. Likewise the sliding carpentry features allow the rooms to become open air terraces. Inside, the space for circulation is minimal and the living areas are of generous dimensions and well-lit. 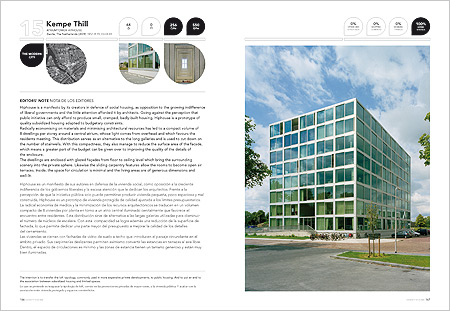