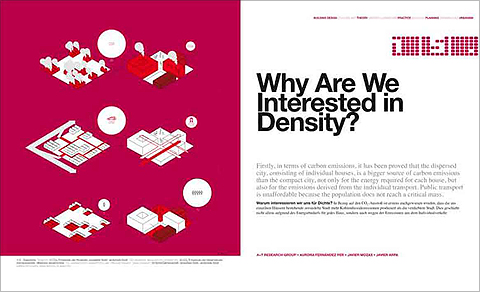 Pages of the manifesto published in GAM 08 Dense Cities

a+t Density manifesto has been published for the fist time in GAM, the magazine of Graz University of Technology (TU Graz). The publication features other authors such as Richard Rogers, Dietmar Eberle, Christoph Mäckler and Winy Maas.

Entitled Dense Cities - Architecture for living closer together, this issue of GAM is therefore the notion of seeing the concept of "density" programmatically unfold through multifarious texts on "dense cities". Taking the form of theoretical manifestos, historical analyses, urban development concepts, and architectural design approaches, these contributions are those deemed appropriate for newly fostering discussion—between architects, district planners, and residents—about new forms of urban togetherness above and beyond set parameters.

Do we really desire the dwellings that we publish?

Do we really want to live in the compact city?

If we were to ask ourselves what the desired house really was, most of us, if we were honest, would recognize that we have an ideal photo in mind.

It would be even more embarrassing if we were to ask ourselves where we live at present, in which type of house, in which part of the city and what plans we have for the future.

Suddenly, density ceases to be a concept, something vital for the planet, a ratio for judging plans.

We know that the dense city has to be built but while building the city one must not forget the house, considered in the singular, for the private user who will put his or her name on the letterbox.

We are returning to the built-up city driven by the need to save on resources but this return cannot be a reluctant one. Need must be converted into desire and we will only achieve this by turning housing into home and each home into our home.

If we were asked what density is, the answer would be Density is home.

If you believe in the dense city, make every dwelling a desirable home.