On density and other concerns 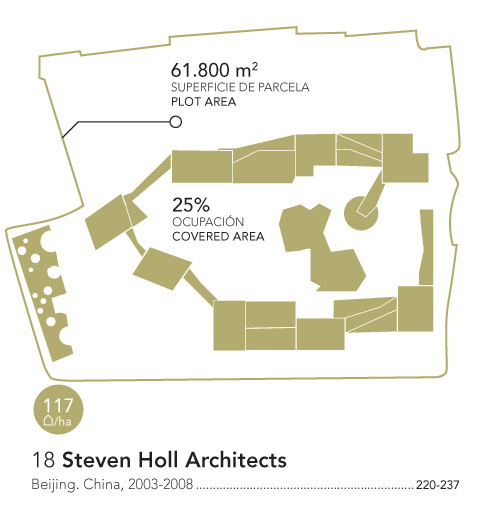 Land occupation is a key issue for a sustainable world. Density projects gathers some historical views and comments by experts on how cities should grow.

Monique Ruzicka-Rossier. 2007
The appropriate question is not how dense city districts should be, but how diverse it should be?
Ecole Polytechnique Fédérale de Lausanne. www.geos.ed.ac.uk/geography/DensityInsideOut.html

Edward Soja. 2002
You [architects] describe in many ways the core architectural view when you say that a city consists of streets, roads and a built environment located within a vaguely defines “urban cloud”. In this vision, the city becomes a collection of separates cells with built environments compacted together to form an urban mass. This view is radically different from the larger-scale spatial or regional vision of the city as an expansive urban system of movements and flows, of good being produced and people living not just in built environments but in constructed geographies characterized by different patterns of income, unemplyoyment, education levels, ethnic and racial cultures, housing and job densities, etc. All these things are often push aside in the obsession –sorry the passionate concern– architects have for desing.
These constructed geographies get lost when the city is reduced enterely to a collection of built forms.
Transurbanism. Edward Soja in conversation with Arjen Mulder: Restructuring the industrial Capitalist City. Nai Publishers. Rotterdam, 2002, p. 90.

Le Corbusier. 1946
The garden city is a will-o’-the-wisp. Nature melts under the invasion of roads and houses and the promised seclusion becomes a crowed settlement. I spoke above the ‘horizontal garden-city’ (so-called family houses). But the solution will be found in the ‘vertical garden-city’ the fruit of modern techniques adapted to the conditions of modern life.
Concerning town planning. Translated by Clive Entwistle from the French Propos D’Urbanisme. Yale University Press, New Haven, 1948 p 68.

Richard Simmons, CABE. 2007
New developments are determined by a road system overseen by highway engineers –with the houses having somehow to fit in between the tarmac. Such random planning, of course, has another side-effect: encouraging more car use, and hence congestion and pollution, ‘it’s interesting now that when you talk to developers building high density developments, which require a management company, they are thinking much harder about the use of robust materials, not wasting so much money on building large amounts of street that won’t be needed, which someone has to maintain. And they’re looking much harder at the lifestyle that will be lived in certain places. So there is a bit of a change happening’.
Commission for Architecture and the Built Environment (CABE), www.guardian.co.uk/society

Meta Berghauser Pont and Per Haupt. 2007
Many of the established uses of density lack spatial precision and are unsatisfactorily for describing and prescribing urban form. Only when density is seen as a composite of aspects, such as intensity, compactness, height, and spaciousness can it be satisfactorily used to differentiate between urban fabrics, understand their characteristics, and design guidelines for future developments. We choose to define density as a multivariable phenomenon. The variables used are ‘fsi’, ‘gsi’, ‘n’, ‘osr’ and ‘l’. These express respectively built intensity, land coverage, network density, pressure on the non-built ground (or spaciousness) and the average building height of an area. These variables are closely related to each other and can therefore be integrated into one diagram, the spacemate.
TU Delft School of Design. www.geos.ed.ac.uk/geography/DensityInsideOut.html

Jane Jacobs. 1961
To generate exhuberant diversity in a city’s streets and districts, four conditions are indispensable:
1. The district, and indeed as many of its internal parts as possible, must serve more than one primary function; preferably more than two. These must insure the presence of people who go outdoors on different schedules and are in the place for different purposes, but who are able to use many facilities in common.
2. Most of the blocks must be short; that is, streets and opportunities to turn corners must be frequent.
3. The district must mingle buildings that vary in age and condition, including a good proportion of old ones so that they can vary in the economic yield they must produce. This mingling must be fairly closegrained.
4. There must be sufficiently dense concentration of people, for whatever purpose they may be there. This include dense concentration in the case of people who are there because of residence.
The necessity of these four condition in the most important point this book has to make.
The Death and life of Great American Cities. Modern Library Edition. New York, 1993. pp 196-197.

Julie Campoli and Alex S. MacLean. 2007
Sprawl is bad. Density is good. Americans need to stop spreading out and live closer together. Well… that’s the theory, anyway. But, as anyone who has tried to build compact development recently will tell you, if there’s one thing Americans hate more than sprawl, it’s density. This is evident in the public planning process as regulations are written and projects are reviewed. Across the country, efforts to increase density have met with stiff resistance. One reason people reject density is that they don’t know much about it-what it looks like, how to build it, or whether it’s something they can call home. We have very rational ways of measuring density, but our perception of it is anything but rational.
Visualizing Density. www.lincolninst.edu/subcenters/VD/

Alain Dinin, Nexity. 2007
Increasing urban density is an issue that must faced, even if local elections approach. The French people will understand that it is easier and cheaper to add a storey on top than building a new construction aside. The diversity of the French society is tied to urban mixture.
We must end the dissociation between public and private developments and let private developers enter the social housing market, after demanding from them precise commitments on pricing policies. We must end the spatial segregation that divides public from private housing. It is necessary to reunite families with different income.
www.liberation.fr

Michael Manville. 2006
We should ask what the goal of downtown revitalization is. Revitalizing the downtown is not necessarily the same as revitalizing the center city, nor is it necessarily progressive. A revitalized downtown might help revitalize a center city, but the causality could just as easily run the other way. And a revitalized downtown might help the poor more than the affluent, but the goal of many revitalization efforts seems to be luring affluent people into empty commercial buildings and/or new residential buildings. The equity effects of such a policy seem ambiguous, especially in regions that aren’t growing and don’t have tight housing markets.
Downtown revitalization: What, How and Why. planningresearch.blogspot.com

Victor Gruen. 1954
This conflict between downtown and the suburbs is a phony. The two are complementary parts of a whole.
Dynamic Planning for Retail Areas, Harvard Business Review, Nov.-Dec. 1954, pp 53-54.

Paul Jenkins. 2007
New forms of ‘not urban, not rural’ areas are emerging in Sub-saharan Africa, as rural areas stagnate and urban areas become saturated with the poor, creating unprecedented challenges for urban development. In this context the majority seem to be opting for best survival opportunities through ‘straddling’ urban and rural, creating ‘linear villages’ and complex multi-directional migrancy patterns that undermine ‘traditional’ geographical, demographic
and socio-economic concepts of ‘urban’.
School of the built environment, Heriot-watt university and Edinburgh College of Art. www.geos.ed.ac.uk/geography/DensityInsideOut.html

Hennie Reynders. 2007
Informal settlements on the fringes of postapartheid South African cities have become the waiting rooms of a promised land. In most cases these communities are now rendered legal and stand in contrast to an emerging other defined as those extralegal communities existing underneath the surface of the visible urban fabric. Including illegal immigrants, criminal networks, and gated communities privileged by past and current bureaucratic malfunction. School of the Art Institute of Chicago and University of Edinburgh. www.geos.ed.ac.uk/geography/DensityInsideOut.html

Richard Burdett, Miguel Kanai. 2006
Cities in the 21st century should increasingly recognize their role as centres of tolerance and justice for people rather than sites of conflict and exclusion. They should reduce their impact on the global environment by embracing dense and compact development rather than allowing profligate sprawl.
City-building in an age of global urban transformation. Cities. Architecture and Society. 10 Mostra Internazionale de Architettura. Venecia, 2006

Serge Chermayeff, Christopher Alexander. 1963
Maybe the day is not far off when planners, designers, development promoters, and other professionals recognize the mere fact that the space between buildings is just as important for the life of the urbanite as the buildings and that they act consequently. If the total land use is planned scrupulously to achieve an optimum use at any level, the inner city could hold just as many vertical, multi-purpose buildings of short term occupation as it could homes on ground level for families with children. Working as active parts in the technological urban context, these ground floor homes could be successful where suburbs have failed.
Comunidad y Privacidad. Ediciones Nueva Visión, Buenos Aires, 1984. p. 68