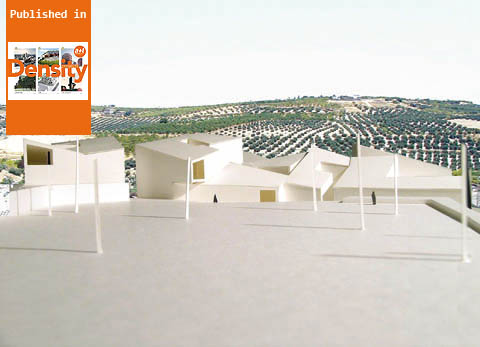 This project is located on a plot whose situation is quite unique. They face a public park in the centre of Ubeda, with an adjacent future public service building.

The project proposes a construction that is strongly linked to the public space, not only because it holds collective housing but also because of the need for an inner patio on the block that would have to become an extension of the public park that the project anticipates. The architects so propose the opening of a passage that will promote urban flow through this newly created common green area.

Entrance to the homes will be by entering private streets that open up to the entrance patios. In this way, the architects wished to humanise the light patios so that they would be crossed not only visually by those walking by, but also physically, by the people entering their homes. It is the final extension of a free and continuous space that began in the park.

Regarding the typology of the homes, MGM was very systematic and modular. Instead of developing ‘model’ homes whose repetition would have caused us rigidity in building, the architects made modules of the rooms and developed packages-modulesrooms related to the patios and facades.