The article Hybrids versus Social Condenser published in Hybrids III Residential mixed-use buildings makes a comparative analysis between hybrid buildings and social condensers. It includes a selection of projects constructed between 1945 and 1975. The Corviale complex, by Mario Fiorentino, is one of these buildings.

"The lineal city rather than the intense city is the aim of this ambitious project for social housing, inheritor of the Le Corbusier scheme. The desire to solve urban growth with one single self-sufficient gesture led to a paralyzing programme. The complex was never finished and much of the facilities were never built. Being isolated from the real city, the contrast with the scale of the surrounding fabric and the situation of illegality which meant the work was abandoned before completion, brought about the failure of the programmed city. With time it has been occupied and customised by squatters who have compartmentalised the common spaces and have created a market trading in illegal dwellings. Parallel to this other non-profit initiatives are trying to redeem the experiment creating new links between the dwellers". 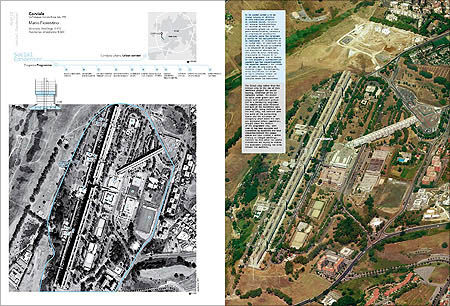