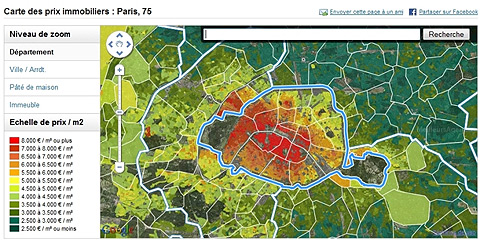 Map of the average house prices of Paris and its metropolitan crown (meilleursagents.com, 2009)

To this can be added the inertia of its enormous historical patrimony, which could end up paralyzing it, and the sky high house prices, which have gone up by 40% on average in the last 5 years***. This situation could end up driving middle class families out to the suburbs outside the city. The effect is such that it is the municipality in France with the least number of inhabitants per dwelling (1.88)**.

The municipal authorities, aware of the danger of paralysis, have launched, since 2001, a series of initiatives aimed at keeping the city alive. The intention is to facilitate the access to housing of the less favoured classes (with the aim of reaching 20% social housing****), to maintain social diversity and to improve facilities and public spaces so as to re-balance the inequality between the East and the West of the city. With the objective of promoting mobility, in 2007 the self-service bicycle system Velib***** was set up, which has made available to the citizens a total of 20,000 bicycles in rental stations throughout the city. At present, a toll charge system, similar to that existing in London is being designed to limit private vehicle traffic.

The large projects being undertaken include the renovation of the Les Halles area, adjudicated to Patrick Berger or the Paris Nord-Est operation, by Dusapin Leclerc, on 200 hectares of railway and industrial land, while at the same time the latest interventions in the new Masséna neighbourhood, projected by  Christian de Portzamparc next to the National Library, are being completed. Furthermore the council has opened up the debate on building height in the city where only the Eiffel Tower and the Montparnasse Tower dare to rise above the Haussman cornices, and is giving a boost to the construction of the Triangle project, designed by Herzog and de Meuron.

At a+t we have covered these changes and in our publications we include several interventions concerning the consolidated fabric of the city: social housing projects inserted in the compact layout of the Parisian arrondissements; new nurseries, schools and facilities which are very often mixed with residential programmes and public spaces in the less favoured neighbourhoods.