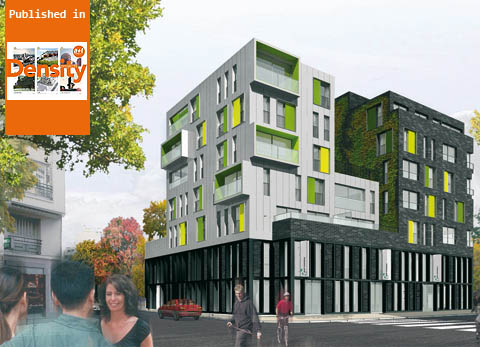 These building projects make up two fundamental parts of the new urban puzzle that is being built in the place of the old Boucicaut hospital in Paris.

The programmatic diversity is materialised in two overlapping layers inside each building. This order of uses requires an important command of their function and thus entails diverse spatial and technical distribution.

The architects have sought a clear function and legibility of the spaces from the main entrance floor. They have done so by means of a central nucleus that contains all of the vertical circulations and foyers at a double height, working as indoor streets.

Programmatic diversity is expressed on the outside through the volumetric fragmentation of each building into two volumes separated by a garden-roof and covered in different materials (brick and zinc).

To highlight the differences between the two buildings, the architects have chosen to stress their similarities and look for an apparent symmetrical effect according to the urban landscape in which they have been placed. The two buildings seem identical at first glance because of their material, form, and façade composition. However in reality, the buildings are fraternal twins and not identical twins.