This is Hybrid. Definition 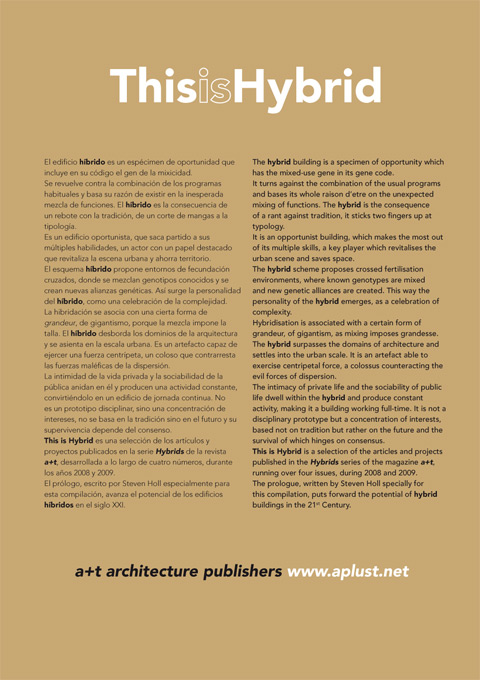 "The hybrid building is a specimen of opportunity which has the mixed-use gene in its gene code.

It turns against the combination of the usual programs and bases its whole raison d'etre on the unexpected mixing of functions. The hybrid is the consequence of a rant against tradition,  giving  typology the one finger salute.

It is an opportunist building, which makes the most out of its multiple skills, a key player  which revitalises the urban scene and saves space.

The hybrid scheme proposes crossed fertilisation environments, where known genotypes are mixed and new genetic alliances are created. This way the personality of the hybrid emerges , as a celebration of complexity.

Hybridisation is associated with a certain form of grandeur, of gigantism, as mixing imposes grandesse. The hybrid surpasses the domains of architecture and settles into the urban scale. It is an artefact able to exercise centripetal force, a colossus counteracting the evil forces of dispersion.

The intimacy of private life and the sociability of public life dwell within the hybrid and produce constant activity, making it a building working full-time. It is not a disciplinary prototype but a concentration of interests, based not on tradition but rather on the future and the survival of which hinges on consensus".

Aurora Fernández Per, Hybrid buildings, This is Hybrid, 50 HYBRID BUILDINGS