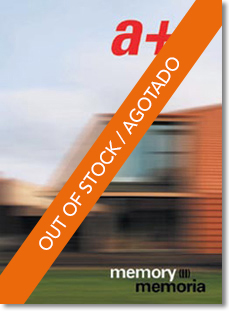 
Second issue from the Memory series published in a+t magazine.

Consider for a moment opening one's eyes wiithout memory or memories; without an understanding of one's environment, without an awareness of one's individuality, without a conception of one's being and without an appreciation of one's history. What is it one would see, hear and feel? What would be the sensation? Surely, to instantaneously re-initalise one's existence without the cushion of gestation would result in confusion to say the least, an agonising over-simulation most probably and no solace in nostalgia for the womb.
Memories of where one has been, of journeys an of participants, leave a particular perspective but they only 'exist' in perspective too. It is not possible to grasp memory in terms of appreciation an recollection any more than it is possible to mentally recreate an event in its entiirety.
Only memories give us a sense of time, a sense of space and a sense of society. However, whilst individual an collective memories can generate open-ended discussion, an understanding of memory itself enables confidence to embark towards a partial understanding without preconceptions or an expectation of fulfilment.

...In our view the first essays that appeared in the late 70’s on postmodernism are overlooked among architects; disregarded because of the poor building results that ‘postmodern‘ architecture produced, the buildings appearing as simple one-liners, lacking nuance and subtlety. Yet those texts contain many references to ‘presence‘, ‘character‘, ‘identity‘, and ‘memory‘ etcetera. Words and ideas that architects today are interested in. These currently popular themes are not new, but themes that have been written about previously, themes that have been discussed extensively.
It would be unconceivable, if not just simplistic to write an essay about memory without referring to and acknowledging, those previous works...

Poring over all sorts of reviews to prepare and document my article, I suddenly became aware of the manner in which my attention was caught by one project or another. As I look at pictures, examine documents and leaf through magazines, the flow of my reading is arrested now and then by a detail. I backtrack and my eyes re-examine another fragment. Unconsciously, it is cut out, isolated, scanned and detached from what precedes or follows it.
The image belongs to me now, it is set on a shelf somewhere in my memory, ready to be used or already forgotten, but there to re-emerge in my subconscious. There are things that we see and others that we do not see, and as we look at things we sift, separate and memorize them.

The momory of forgetfulness
JOSEPH ABRAM

For reasons inherent to their background, in the course of their projects the Diener & Diener team have acquired the intellectual tools for tapping this essential memory of architecture. Working from the theoretical premises of Rossi and Venturi, they have learnt how to forge scholarly links between a given object and the temporal strata of a territory. And they do this without syrupy discourse and good intentions, simply by giving things their undivided and full-hearted attention. They have learnt to work in their own medium, amidst objects and in synchronous mode, without ever abandoning their concrete presence in the real world. Working over the surface of things they come to explore their depth, which leads them to design landscape-objects of great beauty: the building in Hochstrasse, the Gmurzynska gallery, the building on Picassoplatz, and the one on Kohlenberg... In spite of their differences, these singular objects seem to bear the same fabrication mark, as if they proceeded from some hidden theory, interpreted openly and consistently. Reaching as it does into the domain of history, the Swiss embassy in Berlin completes this precious set.